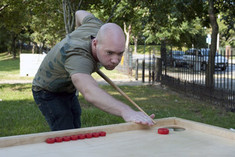 The game was first played in Northern Europe, particularly Latvia and Estonia around 1925-1927. Sailors, while visiting ports of England, played a similar game in the local pubs. The first tables were made from blueprints brought back from England. At the beginning novuss was played in the Latvian port cities -Ventspils,Liepaja and Riga, at the same time in Estonia - Tallinn. In some countries, novuss is also known by Estonian name Koroona.

The oldest record of the rules of the game dates to 1932. During the Second World War, the game of novuss ceased for a while but was re-established quickly after the war.

In Latvia, the game spread even more quickly than in Estonia, and soon emerged as a national sport. The first professional competitions took place in 1932. The Latvian Novuss Federation was founded in 1963. National Championships have been held since 1964 in singles and since 1966 in team competitions. Men's, women's and junior's (up to 15 years old) divisions have been established.

In 1980, the Novuss community contained around 55,000 members. In the meantime, district, city, national championships are regularly organized. Novuss became one of the most popular sports in Latvia.
The game is further establishing itself in Russia, Canada, Israel, Ukraine, Australia, England, Germany and the United States.
Several open novuss championships are conducted in the United States and Canada every year .